Trying to find a single word that best encapsulates the research that Pearl Jephcott undertook, and her research ‘style’, has been quite hard. Variously we have described it as ‘innovative’ and even ‘Millsian’. However neither of these terms do the work justice. Pearl’s work is, of course, innovative and she was a methodological innovator in the true sense of the word. She used a wide range of methods within and across her various research projects seemingly testing, adapting and refining as she went along. If one method did not work she moved onto the next. Yet innovation is only one aspect.  Millsian does not quite do it either. We have used Millsian as Pearl, as Mills advocates in The Sociological Imagination (1958) ‘kept files’ and her archived materials are as detailed as they are extensive. We have also argued in this blog that her work was ‘Millsian’ in the sense through her research ‘speak the politics of truth to power’ (see Mills 2008[c1944]). Jephcott’s concerns were fundamentally for the individuals who she had researched and portrayed in her writings. Yet again these are only aspects of her research.  More broadly it is impossible to delineate Pearl’s work tightly in terms of ‘theme’ – she writes about youth but is not a youth studies scholar in the strict sense of word. She cannot be confined to a single thematic strand as she had such a wide range of interests and preoccupations.

So we came up with JEPHCOTTIAN – the features of which we outline in the slide below and which seem central to her sociological pratice. 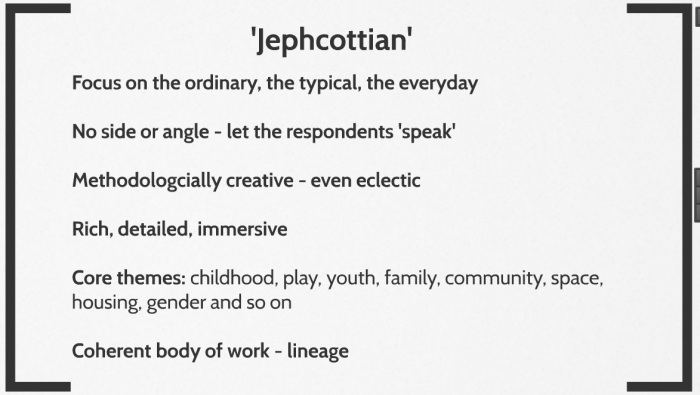 One thought on “What is ‘Jephcottian”?”